FacebookTweetEmailPin
6.         BE YOUR OWN HERO
It’s good to have someone to talk to, that listening ear to hear you out. Not necessarily for advice, rather, ‘cuz just letting it out can bring clarity. But then, don’t make the mistake of leaning so much on that person. Because – 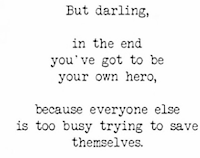 My style when I’m feeling down or going through serious stuff is to shut the world out. I deactivate my social media accounts, go offline and just stay within my own space, pray and listen to music.
I’m lucky to have close friends I get to chat/talk stuff out with also, and it really helps but never have I really opened up to someone completely about my inner pains. Like actually voice out some stuff I have never said to anyone before or even spoken aloud. I did that this year and it was a terrible mistake.
For the first time I told someone, I broke down and the person was there (or so I thought). It felt okay, like I was safe. I thought the person got me. Then I let my guard down and just leaned completely on this person’s shoulder.
No one is Jesus Christ. Everyone has their own issues, so really it was unfair what I did pouring all my luggage. Next thing I heard from a mutual friend was that I was described as being needy. Mehn that shit hurt!
Oh well… Anyway, lesson learnt. Never again would that happen. I’ll continue to be my own hero and learn to process my stuff my own way.
It is okay to talk to someone but please give them breathing space also. They too have their own issues, even that your pastor, he was first human before he became a pastor and even after being called, he is still human and has his own issues.
Please let us learn to be our own heroes. No one really likes a needy person. The only one I know who is never tired of us pouring our frustration on him is Jesus Christ.
7.         AGE IS NOT A NUMBER
Another December 14 has passed. I think I should give up trying to hide my birthday ‘cus no matter how hard I try to, people always remember…
For the very first time, my age actually bothered me. Normally I complain that I’m getting old and all, but it’s usually just bants.
This time it was for real. I wasn’t happy at all. Why? I didn’t feel complete. A kid was missing from the picture, but still, I know I’m not yet ready for that responsibility as there are stuff I need to put in place first.
I feel like I need more time to explore, figure things out, see the world and satisfy my curiosity before finally settling down to start a family. I don’t want to be 60years old and still doing school run, neither do I want to be 60 years old and feel like I didn’t live enough or see the world or explore/open myself to things.
At work that day (December 14th), my branch Manager came to my desk and was going on about with the birthday wishes…I started complaining and saying I wasn’t feeling excited and maybe  I shouldn’t have even come to work.
He said I should be happy that don’t I know some people that would have been celebrating their birthday same day are in the grave? Then I said, they are in a better place, after all that’s what people say when someone dies.
He was stunned. Totally speechless. He didn’t have another word for me. He gave me that look he gives each time I say something outrageous/ridiculous but I know this one topped it all.

Don’t get me wrong, I’m grateful to be alive but then I’m stepping into this serious phase of life, one I don’t think I’m ready for.
30 years maybe this close but I think I still have time to do stuff on my bucket list and keep the memories for myself. What I need now is to just focus and work towards living the life I have always pictured.
When Ose came to my place some weeks back, he saw the glowing stars I put on my wallpaper. He was like, you have started bringing your fantasies to reality. What he said made me feel like I was on track as regards living my dreams.
I’m no more just dreaming or writing about my thoughts on how I want my life to be but this is me actually doing them for real. Yes, there are one or two major steps I’m yet to take, majorly because even the thought of it freaks me out but I know it’s time to face it. Just go for it and carry on from there…
8.         LIFE IS NOT WHITE AND BLACK

There are some things I used to feel so strongly about or borderline sure that I wasn’t capable of doing. Things like falling in love with a married woman, or cheating, divorce, fraud, betrayal. Mostly those stuff that has to do with morality.
I was so opinionated about having to do the right thing that I most times tended to be harsh on my friends, those I felt were doing stuff that I considered morally unacceptable.
Sometimes you need to be in certain situations before you can actually appreciate what people are going through. This year I learnt that life isn’t black and white. There are no hard and fast rules.
I fell in love with someone who is married. At first I was in denial about my feelings because I felt it just couldn’t be. This was the very thing I stood against, but as the days went by, the feelings grew stronger. I got to a point where I began questioning everything I stood for. Should I indulge and lower my moral standards?
As I have come to realize, life isn’t black and white. Having the feelings wasn’t the crime but acting on it was. So I did what I know my conscience would allow me live with…I walked away.
I don’t judge anyone or have opinions about anything anymore. I’m just here living life with the mind-set that anyone could find themselves in whatever situation at any time. When we get to that bridge…we’ll cross it and sort it out accordingly as the situation presents itself. No hard and fast rules to life.
9.         GOD ALWAYS GIVES ME BETTER
I was discussing with someone recently, he was giving me props for how orderly my life seemed to be. I stopped him and said not really, that I actually see it as a problem.
I have a thing for planning everything. I want to always be in control of every detail as much as possible in order to have an easy ride through my day’s schedule (of course I always make room for mishaps as I know full well I don’t own myself or my time). But to a large extent I tend to plan everything but if it doesn’t work as planned I have learnt to accept it as it comes and make do.
Planning too much tends to make me obsess and worry about things working out as planned. Very unhealthy and also in contrary to God’s word. I have over the years had to learn patience and also learnt to completely rely on God and know that whatever happens to me is permitted by Him and as such, no matter how rough that particular period of my life is, it would always work out for my good. Heck, most times things come out even much better than I prayed for. 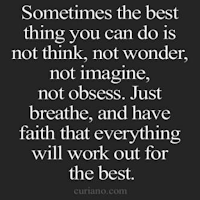 Concerning work, I have since learned that it is all in His hands. The moment I let go and stopped trying to meet my targets myself, God has been blowing my mind time and again.
Towards the end of each financial year everyone tries to arrange himself. I don’t wait for December before I start sorting out my figures and that of my team members. By November I already have a picture of what our closing numbers would be give or take any major changes.
Before proceeding on vacation this November, my team’s balance sheet was a far cry from what we needed. My mind started working overtime on how to overcome the challenge. A part of me was telling me to calm down and not do anything, just abandon myself and everything to God and let Him do what he always does. But the other part of me, the one that plans everything/that loves fixing situations was pondering, trying to figure out what and what can be done. I settled for meeting my senior colleague to help out since his team was doing great. He assured me that by December he will help out. I told myself situation fixed. All was well again and then I went on leave.
During my leave my colleague called to say the person I was banking on had lost almost all his deposit. I kept repeating OMG!
Funny how I thought I had fixed my problem.
Two weeks later my colleague called that my team just got a huge deposit which was just enough for us to close the year on a good note. When she told me, I screamed and said miracle money!!! This was God coming through for me once again.
After the call I got thinking, when would I learn? I’ve seen God work mysteriously as per my job several times, yet I still doubted and tried to fix it myself. I told myself that hence forth I won’t make that mistake again. Whatever comes, I‘ll just let God. Even if I lose my job, I’ll know it’s His plan for me because one thing I know for sure is He always gives me better. I’m done with the planning, obsessing and trying to control everything.

10.          IT’S YOUR LIFE NOT THEIRS
You know how it seems we’ve all got other people’s lives figured out but have no clue what next to do with ours?
Opinions…everyone has that. Society has laid out plans for you to live your life, family has certain expectations for you to meet, your friends need you to act in certain manner so as not to embarrass them, your colleagues need you to be that machine so their work load is reduced…. but hey, it’s your life and not theirs.
“Don’t let nobody tell you your life is over
Be every colour that you are
Into the rush now
You don’t have to know how
Or know it al before you try…- Aly & Aj (Rush)
Everyone seems to know exactly just what decisions you should be making. How long would you have the back seat in your own life? Waiting for people to toss you around with their unsolicited advice. Don’t you think it’s time you do you and just live your life the way it pleases you? Damn society and damn everyone with their idealistic expectation of how you are supposed to live.
Its time you discovered who you truly are and just roll with that. Your happiness and sanity is in your hands. No one can drive you crazy unless you give them the keys.
Life is too short to waste it trying to please anyone or live up to some people’s standards who really don’t care about your happiness.

Be with those who bring out the very best version of who you are, not those who try to mold you into someone you can’t even recognize in the mirror.
Well, what do I know? …I am but just a kid
FacebookTweetEmailPin