FacebookTweetEmailPin
Our start up time for the day’s activities was initially set for 7:00 am, but most persons were still asleep. The previous day’s journey was a long one. I think I was one of the early risers that morning.

I looked over at my roommate – Mute, he was fast asleep. I’m an early riser any day even though sleeping is one of my talents. I peered out the window, the environment was calm with no one insight save two baboons.

I put on a t-shirt, dashed for the cupboard to reach for my camera and off I went to take shots of the mammals.

Pamilerin came over. We chatted for a while after exchanging pleasantries. The weather was good, the ambience of the reserve seemed safe for a morning run. We decided to go for a jog.

We got back to see the once lazy vicinity swamped by Baboons. The previous night, we were warned that the baboons do open the windows while the occupants slept. Key words that stuck – ‘windows’ and ‘slept’. 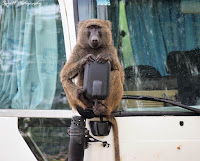 I figured we were past that, after all I had a rather peaceful night. Couple of minutes later, I realized the errors of my thinking. Mute joined us, as well as Tobi (Pamilerin’s roommate). I spotted a Baboon chilling on our tour bus. I asked Mute to go with me so I could get some shots.
Remember the first key word – windows. Before going for the run, I left our room door shut without using the key since Mute was in. Mute did the same thing ‘cus we were hanging around the room. Tobi raised an alarm that a baboon had just entered our room! Heck! They said windows…no one warned us they opened doors too!
Things moved quickly from there on. I went through; adrenaline rush, disappointment, apprehension, respite, apprehension, anger, victory…
Adrenaline rush –
It was our room that got invaded. Our personal effects were at risk. Mute and I both ran towards our door but believe me, we were helpless as the chief baboon was guarding the door. The fierce look it gave us was enough to make us retreat.
All we could do was hope for minimal damage. My mind kept processing that the longer the baboon was in there, the more damage we’d have to deal with.
Mute picked a stick and charged for our door. The chief baboon went into attack mode, both of us went into flight mode.
It chased after us.
Pamilerin and Tobi were not spared. Four of us ran for our lives. Being chased by a baboon wasn’t part of the plan ni…I didn’t come all the way to Bauchi to get devoured by a baboon. I kicked off my slippers so I could move faster, thankfully I held on tightly to my camera.

The baboon retreated. By then the other baboons had gathered around our door. My heart sank.
It sank even further when I sighted a baboon run out of the room with my packet of popcorn. That popcorn was securely kept in a sealed back pack!
Mute was the brave one. I stood pointing at the baboon as it ran off with the popcorn. Mute charged once again towards the room, raising the stick he picked for self-defense in the air. The chief baboon wasn’t moved. He ran toward us, growling. We all took off. Mute was behind us. I turned just in time to see the baboon widen its teeth around Mute’s ankle. Thankfully, Mute made a swift turn, unaware of what he escaped.
Disappointment:

The feeling of hope I had on seeing an armed mobile policeman along with a man looking all confident alight from a vehicle died the minute I realized they were not there to help, but instead they came to watch free drama. *sigh
For a split second I saw myself snatching the gun from the man and charging in to the room, while spraying bullets on the damn animals. I wish…
We gave up trying to get rid of the animals.
They had won the war, while we stood defeated. This was their territory and we were the obvious invaders.

Apprehension:
My heart kept breaking while waiting for the animals to clear out. With each passing second, I imagined a tear to a shirt, my note being tossed in the air, money getting shredded. One of my phones was on the drawer by the cupboard, my new camera lens also!
I didn’t want to step into the room again. I wasn’t sure my heart would be able to handle the sight. I knew the moment I stepped into the room, whatever was left of my fragile heart would shatter. Below are pictures of the damage;

Respite:
Wait, you thought you’ll see pictures of a completely thrashed room? Lmao. God pass you…
It was a big relief it wasn’t half as bad as I had imagined. Trust me, it could have been worse. Two other rooms got battered later that day when we went for safari ride. The mess was disheartening, I didn’t bother snapping it. Not a memory one would want to remember. The walls were stained, bed sheets soiled, drinks, food stuff thrown around, the chaos, damaged ceiling…it was a terrible sight.
It looked like my room was burgled. The drawers were all out, my clothes brought out of the bags and scattered on the ground like the thief was looking for something in particular. Thankfully my phone and camera lens were intact. The weird thing was, none of Mute’s things was touched.
Apprehension:
I started taking stock of my things. Everything seemed in order save for the popcorn the Baboon took. I arranged my stuff. Time to get ready for the day’s activities….that was when I realized my branded socialprefects t-shirt was missing…
Anger:
After searching for 15 minutes and still not finding the shirt, I began to feel really pissed off. The hate I felt towards the baboons was real. Mute was like give up already na?
As in, there was no corner of the room I hadn’t checked. I turned my bags over, still no shirt. It was quite infuriating. I would be the only one not wearing the branded shirt and there was no way I could ask for another one.
I looked at Mute and realized he wasn’t exactly helping to search for it (okay, Mute this is the thing I said I wasn’t going to tell you that day, that you will read about it.) I looked at him just standing there, watching me tear the room apart. I began to suspect he was the one who hid it, you know that annoying prank we play on people…
Victory:
I didn’t confront him. I needed peace to reign. A part of me believed he hid the shirt. I took a deep breathe.  A thought came to mind – what if the baboon took it and then is later seen running around wearing the t-shirt! Like in those documentaries where we see monkeys dressed in t-shirts while chained to a stick.
That would have been the end of me. I’d be the butt of all jokes till the end of the journey…Enime, Tunji, Tobi and Val wouldn’t let me hear the last of it on the way back to Abuja. That thought scared the crap out of me. I didn’t know when I walked out of the room, ignoring my suspicion of Mute to go looking around for the shirt.
Then this happened:

Oh that feeling of sweet victory! I was going to breathe just fine in the bus after all.
Heaven smiled on me and I was spared the horror of being verbally slaughtered by jokes. The embarrassment would have been terrible to handle. I would have gone back into my shell and that would have been the end of the fun for me.
As usual, when you get out of a shitty situation, that’s when you can laugh about it. Everyone came around and I was laughing while narrating the entire experience, even branding it part of the adventure. But when it was happening, God knows it wasn’t funny at all….
Those that know me well know the oddest things just keep happening to me. Sort of like, my case is indeed different…
“My life gets kinda boring, I need something I can confess…”- Secrets (One Republic)
FacebookTweetEmailPin