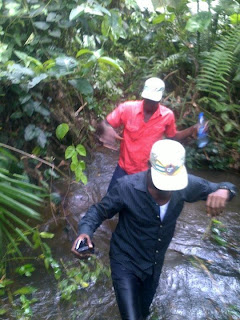 I looked up and caught Mr. Deji capturing my movement with his camera phone. I launched a verbal assault on the government workers. I let them know it was sheer wickedness for them to allow us go into the forest not properly kitted while they were all fully protected. Ometere and Temple added their voices to mine, all three of us complaining, ignoring what they had to say to calm our frayed nerves.
Once again on the marshy ground, we continued our journey through the forest. This time, Temple did the complaining as I walked hastily past the officials in anger. I didn’t want to be close to them to avoid uttering words I would regret later. Not even the much awaited allowance from the Federal Government could pacify us. The bank alert came in at a wrong time though it succeeded in putting a faint smile on my lips.
Finally, we were at the farm.
The farm was located at the heart of the forest. I didn’t pay attention to the ‘enumeration’ they were doing. Less than ten minutes and the ‘enumeration’ was over. We went thorugh all the horror for just a few minutes work!
How unnerving and annoying. The farm was not even large scale with mature crops; just some acres with few recently planted arable crops. Permit me at this junction to hiss loudly…mtcheeeeeeeeeeeeeeew! I’m still pissed even as I write this note.
Enumeration over, it was time to head home. We went through a different route from the one that led us in, this time we had to cross another which was in a more deplorable condition than the previous one. This river had insects lurking around and ants climbing the wood, skimping around in the mud. This was far from fun of any sorts. I felt sorry for Temple as he danced on the spot trying to get rid of the ants that had invaded his trousers and were eating at his skin. 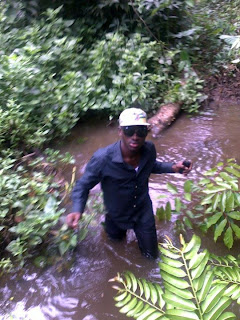